We hurtle towards the menacing dark sphere. Harris clutches an imaginary joystick in his right hand, steering the ship left and right, following the little fleet of star-fighters. Something clicks in my mind, but before I get the chance to process the thought we face a massive barrage of fire coming from a group of enemy craft that are streaming towards us from the sphere. Harris’s thumb is a blur as he rapidly returns fire. Fortunately our shields are holding up, but one of the small star-fighters is not so lucky. Caught head on by the incoming fire, the little craft explodes and breaks up. A ruptured wing cartwheels past the side of our viewing screen.

‘We’ve got to make him snap out of it!’ Stevens yells over the noisy warning siren.

We slide around the console, clinging to the edge as the ship lurches violently from side to side. Stevens takes Harris by the shoulders and shakes him vigorously, then I pinch and twist his nose, but his stare remains fixed and his hand clenched, working the imaginary control.

Roused by the sweet and bitter aromas, Harris blinks. He reaches for the coffee and takes a sip. He grins and grabs the doughnut, taking a big bite. ‘What’s happening?’ he asks blandly, wiping his mouth with the back of his hand.

I glance at the screen. We’re almost on top of the sphere when we suddenly lose momentum. The ship starts to drift, while the battle continues to rage around us. Then we feel the ship move steadily sideways.

‘Who’s doing that?’ Stevens shoots a look at Harris. But Harris is still busy chewing, his right hand now gripping the coffee mug.

A dark faceless wall closes in around us. The viewing screen flashes a message:

The viewing screen blinks again, then adjusts. We’ve entered a vast hanger. Huge slanting numbers painted on the floor read ‘327’. A number of other ships are dotted about the cavernous interior. Various humanoids dressed in flight suits mill about, and a group of what appear to be prisoners is being led away by two grey-uniformed officials.

A line of soldiers, in shiny white armoured suits and matching domed helmets, marches menacingly towards our ship. Then it dawns on me.

‘Harris, you were playing one of those Star Wars arcade games!’

Harris’s eyes widen. He frowns and shakes his head. But before he has a chance to reply, one of the grey-uniformed officials strides up, clutching a clipboard. He lifts the top sheet of paper and writes something down, then glares up at us. ‘Open your hatches for inspection,’ he commands.

The shiny-armoured storm-troopers advance another pace. They level their blasters at the ship.

‘You’re dead right it isn’t! You’ve landed us up on the Death Star, you idiot!’ yells Stevens in alarm.

My instinct is to hide. But where? 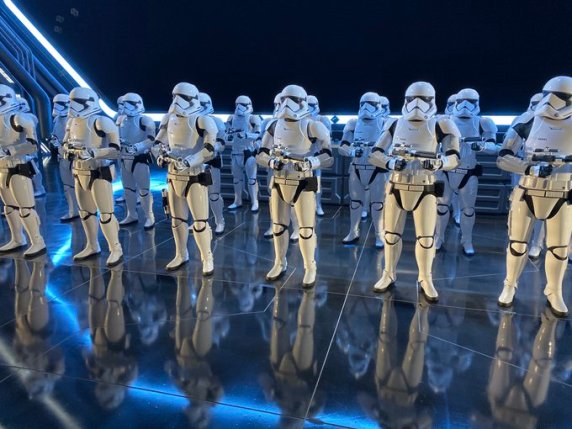 Will our gallant Space Cadets be arrested? Will they be made to face the Dark Lord?
Or will they suddenly wake up to find themselves somewhere else entirely?
Tune in next week for episode 4

And if you we’re wondering what on Earth (or off-Earth) is going on,
you can catch up with the entire first series of Space Cadets here

The challenge this week was paper.
Photo credit: http://www.wdwnt.com